At the end of last month, AbbVie (NYSE:ABBV) informed shareholders that it had submitted its application for Skyrizi to the European Medicines Agency (EMA) to treat patients aged 16 and older diagnosed with moderate to severe Crohn’s disease.

But if Crohn’s is approved as a third indication for the drug in the European Union, what is Skyrizi’s sales potential in that market? To answer that question, let’s go over the phase 3 clinical trial results and assess the addressable market. 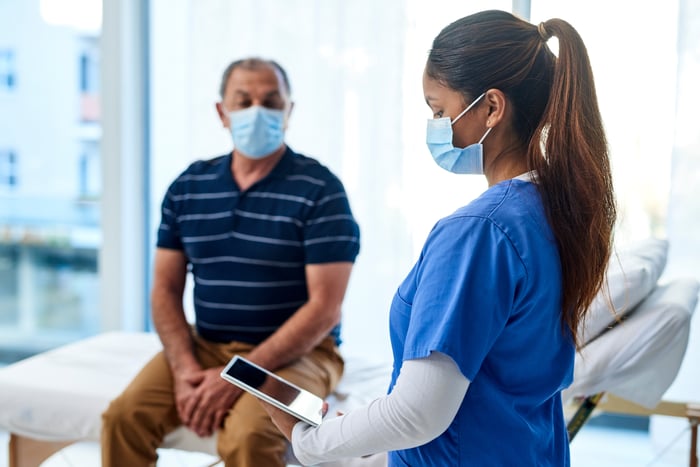 Skyrizi could be an impactful treatment

As is the case with other medical conditions, early detection and diagnosis can help patients minimize their chances of adverse complications and live fulfilling lives. Treatments can range from anti-inflammatory drugs for mild disease to biologics for patients with more severe disease.

With a decision on Skyrizi’s Crohn’s disease application in the EU likely just months away, the question becomes: If the indication is approved based on clinical trial results, what financial impact would this have on AbbVie as a pharma stock?

First, let’s determine the overall patient population in the EU with Crohn’s disease. Based on its estimated 0.32% prevalence and the EU population of 447.7 million, there are approximately 1.4 million Crohn’s patients living in the EU.

In a fragmented market with other drugs like Johnson & Johnson‘s Stelara and Remicade also approved to treat Crohn’s disease, I believe a reasonable estimate for Skyrizi’s patient share would be 10%. If approved, this works out to around 28,000 patients for Skyrizi’s Crohn’s indication.

What’s a reasonable estimate of how much the drug would generate per patient? Well, Skyrizi’s annual list price in the U.S. is $68,000. But given that most patients have health insurance of some kind, this amount is often negotiated lower by insurance companies. This means that it’s very rare for patients and insurers to pay the full list price, so let’s assume that the actual net price between patients and insurers after insurance adjustments is $40,000. And since the cost of drugs in the EU averages half of what it is in the U.S., let’s use an annual net price of $20,000 per patient.

Using these figures, we can estimate annual peak sales of $560 million for this indication alone. This is only 1% of the $56.2 billion in revenue expected this year for AbbVie, although it would be a notable boost to Skyrizi — which is on track to generate $2.8 billion in revenue this year. And with dozens of other indications at various phases of clinical development within its pipeline, AbbVie appears positioned to quickly bounce back from Humira’s U.S. patent expiration in 2023.

Since AbbVie’s stock is up 21% year to date, you may be wondering whether it is still a buy. Let’s take a look at AbbVie’s valuation relative to its industry and the stock’s dividend payout ratio to find out.

At its current $132 share price, AbbVie is trading at a forward price-to-earnings (P/E) ratio of 9.3. This is well below the general drugmaker industry average of 11.1.

And as AbbVie continues to build a post-Humira future, income investors can collect a well-covered dividend, with a yield now at 4.3%. Based on AbbVie’s $5.20 in dividends per share that it paid in 2021, the stock’s payout ratio will be a sustainable 41.1% for this year.

AbbVie’s undervaluation, safe dividend, and solid yield all make the stock a great pick for both value- and yield-oriented investors.

This article represents the opinion of the writer, who may disagree with the “official” recommendation position of a Motley Fool premium advisory service. We’re motley! Questioning an investing thesis — even one of our own — helps us all think critically about investing and make decisions that help us become smarter, happier, and richer.

Definition, how it works, benefits, and more