I’m a meat-eater, through and through. I think the last time I went a single day without eating meat was three years ago; meat has always been the foundation of my diet, for reasons you’ll find out later in this piece. Over the past few years, I’ve become much more interested in plant-based diets. As my concern for the environment grows, plant-based eating appears as an important choice in a lot of the sustainability research I do. Plus, I publish so much plant-based content for this paper! Seeing week after week of delicious, vegan food, the diet seemed intriguing. So, I decided to challenge myself to eat plant-based for a week.

Here are a couple of things I’m going to try to get out of this challenge: first, creativity. I think eliminating animal products from my diet will push me to be a little more creative with the food I make. I usually end up falling into a rut, producing the same few meals every week, which gets boring. Secondly, and more importantly, I want to see if a plant-based diet works for me so that I can eat more sustainably. 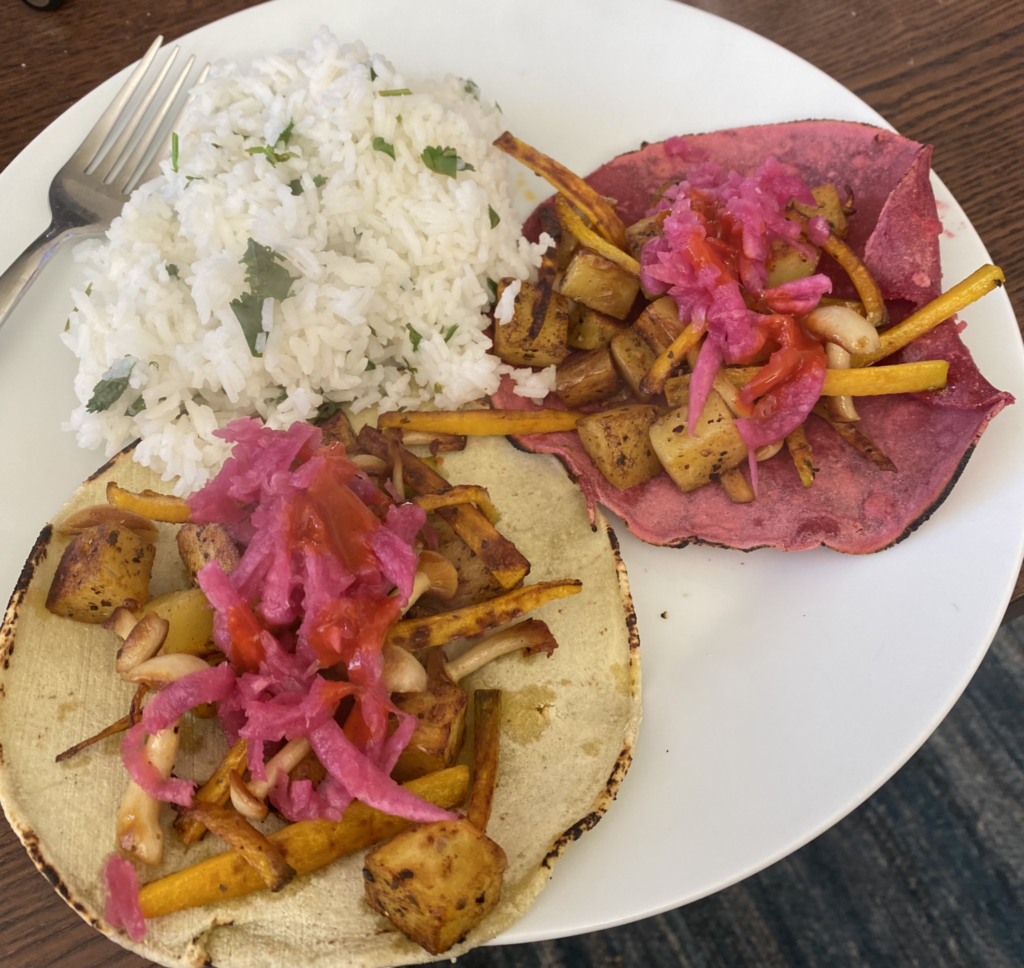 Day one started with a three-and-a-half-hour, traffic-ridden drive to Isla Vista from my home in Orange County. I arrived at around 2:00 p.m. on an empty stomach, starving. I threw some rice in my rice cooker to work its magic while I unpacked, then pan-fried some potatoes, mushrooms and carrots. I seasoned it all with oregano, cumin and paprika, then put the veggies into some tortillas for a vegan taco lunch. I topped the tacos with red cabbage sauerkraut that I purchased at Fermentation Farm, a must-stop every time I go home. If you live in the Costa Mesa area, please check them out! I added cilantro (from my garden!) and lime to the rice, and ate it on the side. The first meal of vegan week down, in delicious fashion. 13 more to go.

Dinner was decidedly less creative. My girlfriend and I got a couple of ingredients out, considered them, then put them away and opted for pizza instead. I must say, there was a twinge of pain un-checking the “pepperoni” and “bacon” boxes. Being lactose intolerant, I always opt for vegan cheese, so at least I wasn’t making any concessions there.

Overall, a solid day of eating that left me full and satisfied! I did start to crave chicken towards the end of the day, which was a little frightening. Was I so used to eating meat that a day without it was already inspiring cravings? Get a grip, dude. It’d be interesting to see how that evolved over the course of the week … 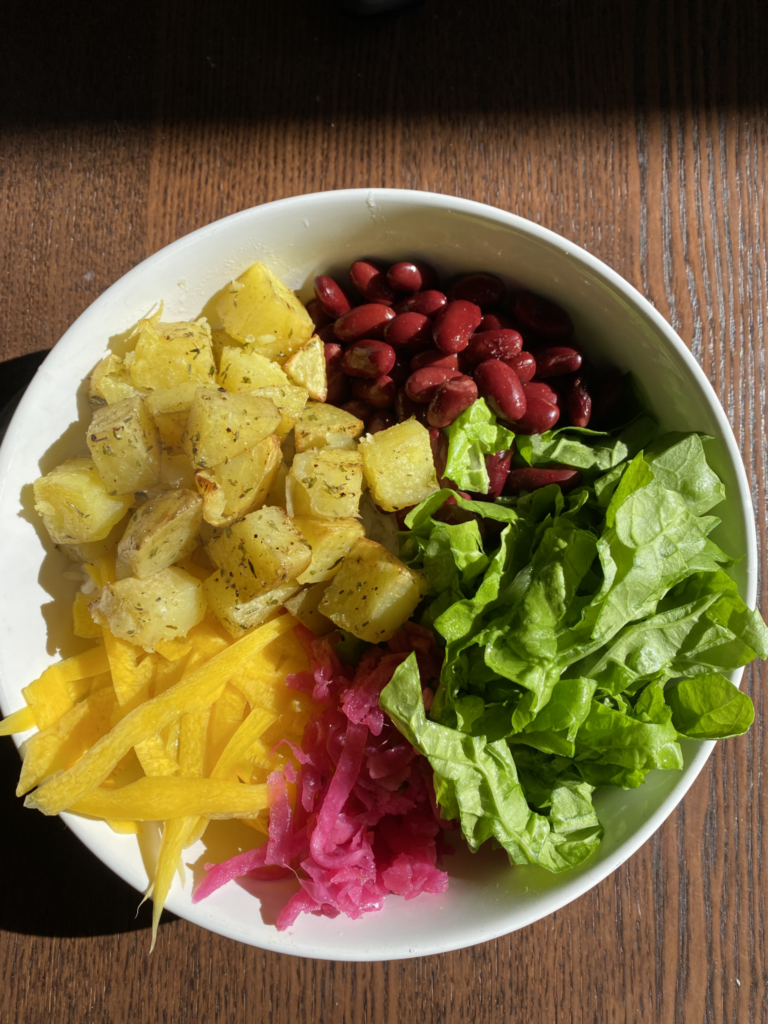 Instead of eating breakfast, I usually opt for an early-ish lunch. That was the case today when I built myself a hearty bowl of roasted potatoes, carrot shreds, kidney beans, shredded lettuce (from mythe garden!), kraut and day one’s leftover rice. I squeezed half a lime over it and covered it in nutritional yeast, as well as some vegan buffalo sauce. Delish.

An hour or two later, I started to feel a little … odd. Lightheaded, woozy, floaty. Having no formal education in nutrition, I decided I might be low in iron, considering I’d gone a whole 36 hours without eating meat. So, I whipped up a quick chia pudding that I let marinate, stew, gelatinize … whatever you call that process, while I worked out. It was a nice post-exercise, early afternoon treat.

Around 4:00 p.m. is when I faced a big roadblock, something that would probably be the single most complicating factor in this challenge: my stomach. The beans were making themselves known, to put it lightly, and doing so in a rather painful way. I have an incredibly sensitive stomach, almost embarrassingly so. Looking at a list of vegan proteins, my options seemed dim. Beans? Ouch. Nuts? A digestive no-no for me. Seeds? Nope! Soy? Almost as bad as beans. Seitan? I’m gluten-intolerant. Through the gauntlet constructed by my many digestive obstacles, there’s always been one meal I can count on: some variety of cooked meat, veggies and starch. This trifecta makes up 90% of the meals I eat and covers almost every base I need to be covered without hitting any of my intestinal tripwires. With this option gone, I was going to have some trouble getting protein. That was a problem for day three, though.

I decided on a light, Thai-inspired noodle dish with zucchini and mushrooms for dinner. Having to leave fish sauce, my favorite umami bomb, out of this dish was a bummer. Fish sauce is great for adding that deep, meaty flavor to any recipe, especially one without meat … if only this was a vegetarian challenge. 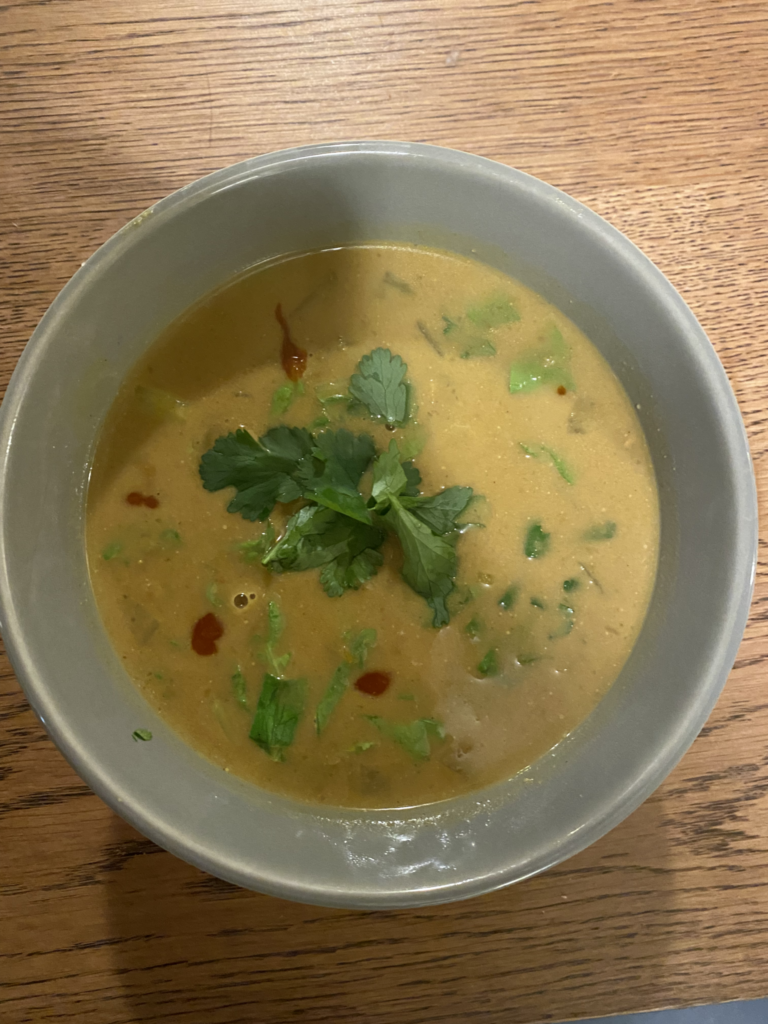 Protein day! For lunch, I made sweet potato toast with an avocado/tomato mash. Divine. On the side, I had a salad with some shredded lettuce, parsley, tomatoes and quinoa (one of the suggested vegan proteins I can actually digest) with a dressing of olive oil and tamarind puree. A little nutritional yeast took it to the next level. A delicious lunch! So far, I’ve been eating pretty damn well. My meals thus far were all satisfying, beautiful and fun to make.

It was time to break out the nutrition calculator. I entered rough approximations of my recipe, ran the calculator, and … was pretty surprised with the result! According to the calculator, my meal had netted me 30 grams of protein, nearly 50% of my RDV (recommended daily value). Pretty solid!

Wanting to hit my goal of 63 grams of protein, I decided dinner would be this Squash and Lentil Soup by Ambitious Kitchen. It tasted delicious, but, unfortunately, had only 16.3 grams of protein per serving — I fell short of my goal by almost 17 grams. However, that did not stop the powers of plant protein from seriously punishing my digestive tract. Awesome! Out of curiosity, I added half a pound of chicken to the calculator. It doubled the amount of protein in a serving, bringing the total to 32.7 grams. By adding two or three chicken thighs, I would have met my protein goal. That was a little disheartening to see.

While day three was full of delicious food, it was starting to become clear why a plant-based diet isn’t sustainable for me, and that if I was going to go the distance, a solution to this protein problem would need to be discovered soon.

Remember what I said about going the distance? Yeah, that wasn’t going to happen. I woke up on day four feeling extremely nauseous, nearly sick to the point of seeing day three again. I decided to call off the challenge here. There was no point in suffering through another four days of intestinal distress just to say I’d gone a week. Maybe if I had stuck it out, my body would have gotten used to the plant protein, but I wasn’t willing to take the risk.

That isn’t to say I didn’t gain anything from this challenge. Going back to my goals from day one, the creativity box was most certainly checked. I came up with some dishes that are definitely going on my weekly menu. Day three’s sweet potato toast was absurdly delicious. More importantly, I gained a new awareness of my nutrition. I had never used a nutrition calculator before; I had always assumed that because I was eating meat, veggies and carbs, I was getting everything I needed. Despite not hitting my goal, using the nutrition calculator felt great. I knew exactly what I needed to eat more of and what I needed to cut back on. Eating mindfully is essential.

Above all else, I gained an appreciation for my current diet.

Throughout these three days, I found a voice in my head asking, “Why?” and “Wouldn’t this be better with meat?” Now, that might have been the little, carnivorous goblin who lives in my brain making his cravings known, but I think there’s a simpler, less horrifying answer. The idea behind this challenge was to see if a plant-based diet would work for me, in order to eat sustainably. I forgot to consider that I already do. That little, carnivorous goblin has a point! I mainly eat meat from regenerative farms that pasture raise their animals. These farms support the environment, just like a vegan diet can. I had already been eating a near-equivalent to a vegan diet (in a sustainable sense) while not absolutely wrecking my gut every day.

In today’s media of extremism, I see a lot of calls for everyone to go vegan. I also see a lot of calls for people to keep eating meat, calling veganism stupid and unhealthy. The issue isn’t black and white; there’s no one answer for everyone. Some people thrive on a vegan diet. As much as I would like to eat plant-based food for the sake of the environment, it’s simply not an option for me. That doesn’t mean, however, that somebody like me is exempt from making more sustainable dietary choices. While there’s no “perfect diet,” everyone still is capable of and has a responsibility to eat more sustainably. In buying meat, I choose to support sustainable, regenerative farmers who pasture-raise their animals instead of opting for disgustingly unsustainable and negligent factory-farmed meats. Primal Pastures, a local farm my family has been buying our meat from for years, is a perfect example of a place to buy meat that is farmed in a way that actively helps regenerate an environment stunted by unsustainable and disrespectful farming practices.

I implore you to push yourself, dietarily speaking. Try new things, see what works for you, and please, keep the environment in mind.

A Meat-Eater’s Foray into Plant-Based Eating